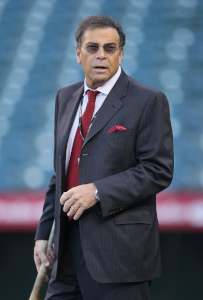 Dennis Gilbert embodies the notion of a life of meaning and purpose, both in the business world and in the world of sports.  He is one of the most respected leaders in the world of life insurance and became a baseball player’s agent at the dawn of free agency in the 1980s and 1990s.  As the founder of the Beverly Hills Sports Council, Dennis was named “The Most Powerful Man in Baseball” by USA Today in 1993.  He eventually left the world of player agency, became a Special Assistant to the owner of the Chicago White Sox, the Founder of the Professional Baseball Scouts Foundation, and an influential philanthropist, especially for the community where he grew up, helping kids to realize their dreams through the RBI Youth Program.

But Dennis Gilbert did not begin life pre-ordained for such accomplishment.  He grew up in the working-class Los Angeles community of Gardena, went to Gardena High School where he fell in love with baseball, and dreamed of becoming a major leaguer.  He was signed by the Boston Red Sox in the later 1960s, moved on to the New York Mets organization, and five years later, found himself playing for the Mets’ Class A Visalia California League team, making $600 a month and getting $3 per day in meal money.  After a year of playing in the Mexican League, Dennis realized his dream was not going to be a reality.  He was lost and uncertain and could have gone in a number of directions.  Dennis Gilbert was to achieve greatness in his chosen fields and that is the man we are honored to welcome to After the Glory.