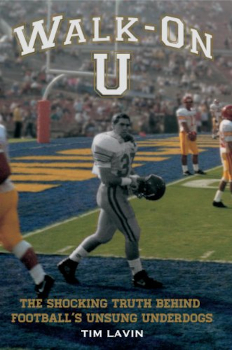 Tim Lavin had a memorable career as a running back and fullback at the University of Southern California from 1988-1992.  He was that rare elite high school football player who walked on at USC and so impressed the coaches that he was granted a scholarship for his last two seasons with Trojan football.  He realized that his story as a “walk-on” needed to be told, and his book, Walk-On U: The Shocking Truth Behind Football's Unsung Underdogs, illustrates the incredible phenomenon of the college walk-on athlete.  Depicting the ugly, the bad, and the good, this book is about the survival, education, mental toughness, and character-building of student-athletes who, without athletic scholarships and true to their talents, walk on the team in search of a dream.  The seldom discussed realities of true walk-on experiences cover everything from heart, determination, patience, and the sheer will of these aspiring student-athletes as they attempt to conquer massive amounts of adversity and abuse while they willingly pay to practice.

Tim’s book is about achieving a humbling internal victory not seen by the fans, both on and off the field, and providing building blocks for future success in life after sports.  Following graduation from USC, Tim received two NFL tryouts, then retired from football, worked in the field of security for two major Bay Area teams, and ultimately established a successful promotional products company named for his college football moniker, Mad Dog Promos.