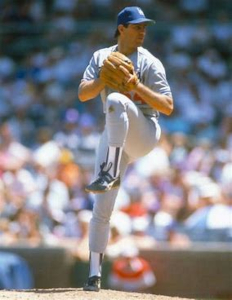 Timothy James Leary, now age 62, is a former professional right-handed baseball pitcher.  Born in the Westside of Los Angeles that he still calls home, he came to baseball as a child and played in all of the significant youth levels of baseball, ending up at Santa Monica High School as a pitcher, where he posted a 10–2 record in his senior year.  Tim was named to the 1976 All-California Interscholastic Federation first team and went 16-2 (with 18 complete games of 9 innings) to lead his American Legion baseball team, Santa Monica Post 123, to the national championship.  An outstanding student, Tim was a three-year star at UCLA, setting a school record for complete games, and ended up with the fourth-highest strikeout total in UCLA history.  He turned professional in 1979 but used offseason opportunities over the next eight years to finish his education, resulting in a UCLA economics degree in 1987.

Among Tim’s amateur baseball highlights was leading the United States National baseball team in 1978 to a silver medal in the World Cup played in Italy.  He was also part of the USA National Team at the 1979 Pan American Games.

Tim played professional baseball from 1981 to 1994 with the New York Mets, Milwaukee Brewers, Los Angeles Dodgers, Cincinnati Reds, New York Yankees, Seattle Mariners, and Texas Rangers.  He had his greatest season in 1988 with the Dodgers, helping a strong pitching staff lead the team to a World Series championship, led by the inspiring play of Kirk Gibson, whose dramatic home run in Game One of the Series is one of baseball’s all-time most memorable moments.

Tim has spent his post-MLB career as an accomplished pitching coach and teacher.  He has served as pitching coach at Cal State Northridge, UCLA, Loyola Marymount, and the Brentwood School, and is now a sought-after tutor for young up-and-coming travel ball athletes.  Tim Leary is a member of the UCLA Bruins Athletics Hall of Fame and the proud dad to two daughters and a son.