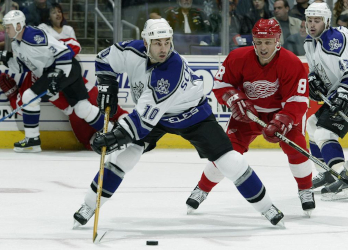 Mathieu David Schneider, age 52, is an American former professional NHL ice hockey player who played an offensive type of defense for various teams over a remarkable 22-year career.  He was born in New York City, the first of two sons born to Sam and Aline Schneider.  His father is Jewish and his mother, a French-Canadian from Quebec, converted to Judaism before marrying his father.  He grew up in New Jersey and moved to Rhode Island for his high school years, where he advanced as a promising elite ice hockey player, with baseball being his other high school sport.  Mathieu was part of teams in high school that won three of the school's 26 straight Rhode Island state hockey championships.  He left high school after his junior year to join the Cornwall Royals of the Ontario (Canada) Hockey League.

Mathieu was drafted in the 3rd round of the 1987 NHL Entry Draft by the Montreal Canadiens, and played his first NHL game a few months later when he suited up for the 1987-88 opening night against the Philadelphia Flyers.  After just four games however, he was sent back to his junior team for the rest of the season.

He would spend the entirety of 1988-89 with the junior team and then split the next season between the NHL club and their farm team.  But Mathieu showed true promise, scoring 7 goals and tallying 21 points in 44 games with the Canadiens.  He earned a full-time NHL roster spot for the 1990-91 season.  Just two years later, he experienced the ultimate in team sports, the Stanley Cup, where the Canadiens beat Wayne Gretzky and the Los Angeles Kings in a memorable five-game series.

Mathieu eventually played with a total of 10 NHL teams over a 22-year career, and enjoyed a stellar international career with multiple Olympics appearances.  Upon retirement, after serving as a respected player representative for several of his teams, he became involved with the NHL Players’ Association as a Special Assistant.  He has had a major impact on changing game rules to promote safety, especially adjustments to headshots and boarding rules.