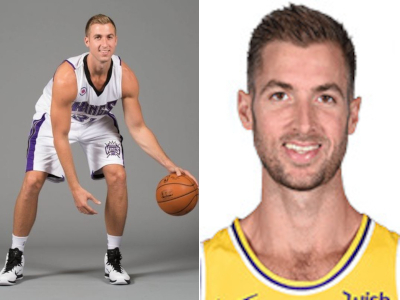 Twin brothers David and Travis Wear were elite basketball players in high school, college, and the pros.  The Wear brothers attended Mater Dei High School in Santa Ana where David was a two-time CIF State champion in 2007 and 2008.  While there, David won a silver medal for the United States national team at the FIBA Americas Under 18 Championship.  As a junior, he averaged 18.9 points and 10.0 rebounds per game, and as a senior, he averaged 16.4 points and 7.5 rebounds per game.  David was selected as the 2009 county boys' basketball player of the year, a 2009 fourth-team Parade Magazine All-American, first-team All-Division I-AA member, first-team all-league member, second-team all-state in 2009, and an all-state sophomore in 2007.

As an elite college recruit, David was listed as the No. 16 power forward and the No. 59 player in the nation in 2009.  After a whirlwind recruiting experience, the Wear Brothers enrolled at the University of North Carolina.  David contributed 2.9 points and 1.7 rebounds a game while averaging over 10 minutes per game for the Tar Heels, which missed the NCAA Tourney in 2010, a rarity for the UCLA of the East.  Brother Travis said playing for North Carolina "wasn't what I thought it would be.” The twin brothers transferred after the season in May 2010 to UCLA, where they had to take a redshirt year due to transfer restrictions.

In 2013-2014, David scored a career-high 18 points against California, eclipsing his previous high of 17.  At the team's annual banquet after the 2013-14 season, he was named the team’s top defensive player.  David graduated following the 2013-2014 season, went undrafted in the 2014 NBA draft, and played in the NBA’s development league with a brief stint with the Sacramento. Kings.  He then played 2 seasons in Spain and a season in Osaka, Japan before finishing his pro career in Australia in 2018-2019.  David is now a mortgage loan originator with NFM Lending, Costa Mesa, CA.

After having an appendectomy, Travis missed the first three games of the 2013-14 season.  He went on to an outstanding year, finishing ninth in the Pac-12 in FG percentage, shooting 44% on three-point tries, including 10 of 19 in his final 16 games.  He scored a season-high 16 points on 8-for-8 shooting in UCLA's win over Stanford in the Pac-12 Tourney semis.  At the team's annual banquet, Travis was presented with the Elvin C. Ducky Drake Memorial Award as the team member who exhibits tremendous competitive spirit, inspiration, and unselfish contributions.  He graduated after that season.

Travis played pro ball from 2014 through 2020 and is now developing a thriving practice in commercial real estate lending with Harvest Cref in Orange County, CA.