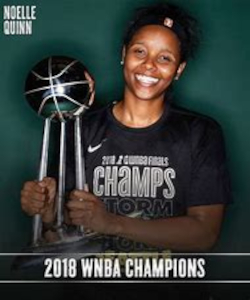 Ms. Noelle Quinn, head coach of the Seattle Storm of the WNBA, was born in L.A. and played her high school ball at Bishop Montgomery HS in Torrance, CA, where she achieved All-American honors.  She led her high school team to four California state championships, three regional crowns, and three division championships.

Coach Quinn then became a four-year star player for the UCLA Bruins from 2003 to 2007.   During her career at UCLA, Noelle played in 107 games and scored 1829 points, averaging 17.1 points per game.  She went on to a successful 12-year WNBA career, playing ball for the Lynx, the L.A. Sparks, and the teams in Washington, D.C., Phoenix, and Seattle.  Her pro career highlight was winning the WNBA championship in 2018 with the Seattle Storm.  Noelle played internationally as well, actually becoming a naturalized Bulgarian citizen in 2007 so she could play with the Bulgaria women’s national team.

In February 2019, after retiring from the WNBA, Noelle was hired as an assistant coach by her last team, the Seattle Storm.  In 2020, she was promoted to associate head coach, and, in that season, Seattle won the 2020 WNBA championship.  Noelle thus holds the distinction of being the only person to win a WNBA Championship as both a player and a coach.  On May 30th, 2021, she was named the Storm's head coach.

In 2020, Noelle was inducted into the UCLA Athletics Hall of Fame and formally honored on the Court at Pauley Pavilion at Half-Time of a 2022 men’s basketball game.

From Coach Quinn: “For me, it’s important that I’m not just a woman.  I’m a Black woman.  I sit with that every day.  Sometimes that can be a negative.  A double negative for me, to be a woman and to be Black.  But I’m empowered in that.  There’s value in that.  My experience is in that.  It shapes me.  It has molded me.  And that is who I am.”