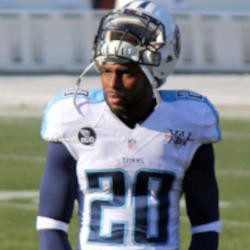 Alterraun Verner was an elite defensive football player at UCLA who went on to a successful NFL career before focusing on his work as a teacher and philanthropist.  He grew up in Southern California and went to Mayfair HS in Lakewood, CA.  He played football at UCLA for four years, from 2006 to 2010, earning multiple conference and national awards, as well as attaining academic success and achievement.  Alterraun was drafted in the 4th round of the NFL draft in 2010 and played with the Tennessee Titans from 2010 to 2013, retiring as a Titan in 2019.  He also played with the Tampa Bay Bucs from 2014-2016 and the Miami Dolphins in 2017.

A gifted student,  Alterraun earned Suburban League Academic All-League honors as a junior at Mayfair.  He completed HS with a 4.17 GPA and earned a score of 1740 out of 1800 on his SAT.  In 2011, he returned to UCLA during the NFL off-season to complete his Bachelor of Science degree in mathematics, graduating later that year with a degree in mathematics/applied science.

In 2011, he held his first football skills and cheer camp at Mayfair High School in Lakewood, CA.  Since then, over 2500 kids between the ages of six and 18 have attended his camp.  Every year, current and retired NFL athletes and UCLA cheer and gymnastics athletes participate to work one-on-one with attendees.

Alterraun’s love for education encouraged him to donate books to students at Napier Elementary School in Nashville, Tennessee.  In addition to donating books, he started an essay contest in 2012 for kids from kindergarten through high school.