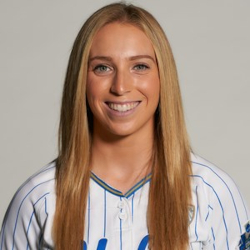 Zoe Shaw was an outstanding prep softball player at El Camino Real Charter High School in Woodland Hills, CA, then a four-year letter winner for the UCLA women’s softball team, helping UCLA to its 11th women’s college world series championship in 2019.  Zoe was born and raised in the San Fernando Valley and, with motivation from her brother, became a standout baseball player before turning to softball as a high school student.  She has been quoted as saying that she competes in softball because she loves to play against great competition to challenge her athletic ability.

At El Camino Real Charter High School in Woodland Hills, Zoe played two years of baseball as a freshman and sophomore, then two seasons of softball as a junior and senior.  She was the West Valley League Player of the Year in 2015 and Second Team All-City, batting .480 with five home runs and 30 runs batted in.  She earned First Team All-League and Second Team All-City accolades as a junior, hitting .449 with three homers, 50 RBIs, and 11 stolen bases.

The 2019 softball season represented the pinnacle of Zoe’s success.  She caught the attention of Team Israel and had the opportunity to play in Israel immediately after her college season was over.  And what a season it was, as Zoe, serving primarily as a shutdown outfielder, helped lead the Bruins to their 11th softball national title.

Upon her graduation from college, Zoe turned her attention to the business world.  After finding success in sales with Cintas, she moved into the insurance industry with Marsh McLennan, where she proves yet again that the skills that made Zoe Shaw an elite college softball player also serve her well in the business world.