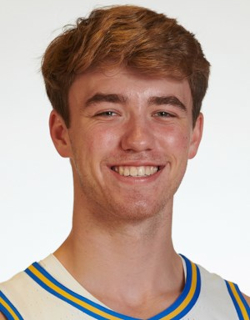 Russell Stong is wrapping up a memorable four-year career as a true student-athlete at UCLA.  He was a walk-on guard for the UCLA Bruins basketball team from 2018 to 2022 and has graduated with degrees in mechanical engineering and business economics.  Russell was raised in Northridge, CA, and went to Crespi High School in Encino, where he was a three-year varsity basketball and varsity volleyball letter winner and helped guide his team to a 27-5 record during his senior year and a perfect 12-0 mark in Mission League play.

Russell could easily have been a scholarship basketball player at many Division II schools, but he never gave it a second thought since his priority was academic achievement.  As a walk-on at UCLA, he played in 26 games through four seasons and was named to the Pac-12 Conference’s Winter Academic Honor Roll in three consecutive seasons (2020, 2021, 2022).

In his senior season, 2021-22, Russell played in 12 games and recorded three points, four rebounds, and one assist in 22 minutes, but in a moment that captured the imagination of America, he made his first career three-point field goal in the Bruins’ home victory against California on January 27.  In June of 2022, Russell was named to UCLA’s year-end All-Academic Team for the third consecutive year (the All-Academic Team is comprised of the individual from each UCLA athletic team with the highest cumulative GPA).  Russell Stong is that often hidden gem among college athletes: playing for the love of the game while securing a priceless education that will undoubtedly lead to great accomplishments in the years to come.